I am writing this message to tell all of you that my dad, Bill Ott, passed away on Saturday July 10. Many of you may have been with him on his last trip July 4th weekend. He went in his sleep and we don't know too many details. . . . . You were his family, too. . . . . . Will and Kim Ott

While I was up on Haleakala Crater, Maui, this past Wednesday (Oct 20) evening  (my 39th birthday), I experienced a meteor shower that was quite spectacular. Later as I was reading my copy of Astronomy, a publication he, (Bill), got me started on years ago, found out it was the Earth passing through some particles left by Halley's Comet in 1986. Skimming our atmosphere at 144,000 MPH!

Anyhow, I was thinking about that again tonight, and was reminded of one night several years ago at the cabin in Mammoth Lakes, CA,  We were checking out Jupiter & its moons with telescopes and hi power binoculars. Dad had the magazine spread out reading the charts while I was looking through the telescope. He stated that I should be able to see two moons. I said I could see three maybe four. He then crossed over to me quickly kind of pushing me away to have a look himself. His immediate comment was one his classic phrases: "All be darn!" you're right!

Just remembering how excited he was to be out with one his favorite hobbies, a hobby he got me interested in as well. Thanks again, Dad! I love you.

We will remember the quiet-spoken man in the red Blazer.

We will remember the ever-present smiles, the miles of smiles.

We will remember knowing it was going to be a good trip just because Bill said he was coming.

We will remember the many trips when the words, “Bill Ott is here.” lit up the faces of all who heard it said.

We will remember the warm campfires, tended to and maintained by Bill.

<We will remember all the needed and appreciated “directional assistance” given to a struggling leader.

We will remember his love and appreciation for the outdoors and especially the desert.

We will remember his inquisitive mind about the history of places we visited.

We will remember our last trip together in the Arizona Strip this past May.

We will remember - the trips taken, the stories told, the pot-lucks shared, the shredded tent, the flat tires and the gentle man with the big smile in the shiny red blazer.

For all the Mohave Outback Explorations participants who ever had the honor of Bill’s company and the opportunity to call him a friend,

"My wife and I were with Bill and several other Desert Explorers on Ken Sears'  trip over the Independence Day weekend, and have been on numerous trips with him over the past six years or so.  I have many memories of Bill from these trips and from meetings of the Desert Explorers.  I was always pleased to learn that he was coming on a trip that we had signed up for.  Bill was never a problem for a trip leader.  Often leaders chose him  to act as "sweep"--the person who brings up the rear and assures that everyone is still with the group.  Bill was watchful of others.  I remember one trip in which Bill was next-to-last in the caravan.  He reported over the CB to the leader that he had not seen the vehicle behind him for several minutes.  We all stopped and retraced our path.  We found the straggler had missed a turn and was stuck in a ditch.

Bill was also an unofficial navigator on many trips.  He was equipped with the latest way-finding technology, and on more than one occasion helped the leader locate an elusive trail or other feature.  Others have mentioned Bill's feirmeister role on most trips.  I still have images in my mind of Bill's dragging dead wood from the surrounding area into camp, sometimes behind his Blazer, other times by hand.   On the Coyote Flats trip earlier this month, though, in response to an apologetic comment that others had gone ahead and set up the campfire, Bill announced that he had "retired" from that role.

Bill was a quiet person and rarely spoke about himself.  However, he and I chatted a bit on the Independence Day trip about his health, his plans, and his appreciation of the Desert Explorers' and other groups' outings.  When I asked about his health, he paused, and said "fair," mentioning a lack of feeling in his hands and feet.  He spoke of it with quiet resignation.  He was determined not to let that keep him from going on outings.  He showed me several inventions he had fashioned to compensate for the declining sensitivity in his limbs, including loops through zipper pulls to make it easier to close and open bags, and poles with loops and a hook to facilitate retrieval of lines he tied to trees to secure his tent.  He took pleasure in finding ways to compensate.  Bill was determined to stay active.  He spoke with  anticipation of plans to take a paddle-wheel boat trip on the Ohio River next summer. Although we all regret Bill's passing, I am cheered by the fact that he was spared a long period of illness and inactivity, which he would have hated.  He was active to the end. . . . . . Allan Wicker"

"Words fail me this morning. Our deepest condolences in your loss of one of the finest men we ever met. Your dad was such a wonderful part of our explorations here in Arizona and will be missed by all that shared a trail or campfire with him. . . . . . Dan W. Messersmith"

"I am proud to have had your father as a friend and will always remember him with affection. He and I were on several trips together in the past few years, visiting obscure places such as Mahogany Flats, Funnel Lake, Goler Canyon, Fossil Falls, and the Orocopia and Pinto Mountains.

Whatever we were doing or wherever we were going, your father was usually the first to the meeting place and the last to leave for home, or in some cases, stay to extend the trip for a day or two by himself. He really loved the desert. We loved being with him, especially around the campfire after dinner, where he always made sure that no one within 30 feet got cold, earning the respectful, friendly title of “Fiermeister.” . . . .We will all miss him. . . . John Page"

"This is truly a loss to us all.  I have known Bill through Desert Explorers and the Friends of the Mojave Road (Goffs) for many years. We have shared many fun desert trips, camped, and covered miles of bumpy unmaintained roads with our groups. The thing that comes back to me time and again is Bill's winning smile. He was a quiet man, but when he would smile at you, his face lit up. He also smiled with his eyes. So when he looked at you and smiled, the warmth you would receive was beyond anything he could have said.  I could tell that Bill's health status was changing over the last year. But I admired him because whatever his affliction was, he was still getting out there with us.  He found ways to adapt to whatever adversity he was enduring. He never complained or campaigned for sympathy. He did enrich our lives. It is my sincere hope that you find comfort that your Dad was very appreciated by his friends, and that he did enjoy his life camping and relaxing outdoors right up to the last day. . . . Debbie Miller"

"I was so sorry to hear the sad news of your dad's death. I believe Bill was one of the most active members of the Desert Explorers; He truly loved exploring the west. And he certainly enjoyed using his GPS and laptop to help us leaders when we were unsure of our way.

I remember on the trip to eastern Oregon a few years ago, our little caravan was many miles into the boonies on a dirt two-track - heading toward the Owyhee River. Bill, using his modern technological gadgets predicted we would come to a "T" in the road, and that when we did, we should go left. Soon, we arrived at the "T", but most of the traffic went right and the way left appeared to be a faint and seldom-used path. But Bill insisted left was the way to go if we wanted to reach the river, so left we went. That was one rough road; we all shifted into four-wheel drive and crept down the steep spots. Bill was surely correct and we eventually did reach the river. If it hadn't been for Bill, we probably would have gone right back at the "T" and ended up who knows where. And what a beautiful spot it was that Bill guided us to! We camped by the river on a sand bar just a short walk from the lovely warm springs that cascaded into the Owyhee. Of course, we all treated ourselves to a soak in the wonderful warm pools overlooking the river. . . . . . . . Marian Johns" 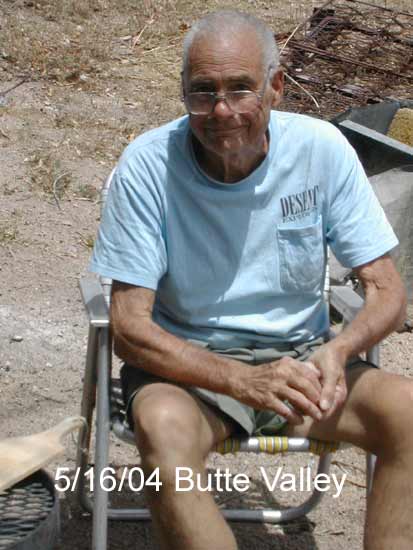