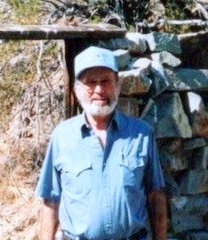 By Anne Stoll
November 25, 2007
In the spring of 2007, the Desert Explorers received a bequest of about 1700 35-mm slides and 5 videos from the estate of DE member Dwight Stroud. A preliminary assessment of the slides was undertaken by me, and from the sample viewed, they are wonderful. The collection consists of full-frame photographs of rock art (petroglyphs and pictographs) taken at sites in California, Nevada, Arizona and Utah. The images are remarkably clear, well-exposed, in good documentary (rather than artistic) style, and in good
condition.
In thinking about the best use of the collection, questions arose about just who Dwight Stroud was. It became clear that few of us knew Dwight or could put a face with the name. So I sought input from folks who did know him. I¹ve spoken with Joyce Jauch, his lady friend of many years, and heard from Dan Messersmith, Homer Meek, and Mary and Charles Hughes. Here¹s what I¹ve learned so far:
Dwight L. Stroud was born on May 8, 1931 on a farm outside of Chanute, Kansas, a town east of Wichita in the southeast corner of the state. Dwight was third from the youngest of six children, five boys and one girl.
Dwight¹s mother was a Puckett from Oklahoma. The family was very poor and Dwight remembered always being hungry. His one gift a year was an apple, a special treat. Joyce says "His parents were very conservative and principled and felt Dwight¹s purpose in life was to work on the family farm, period."
In the 1940¹s the family moved to southern California to the town of Paramount, where Dwight went to school. He joined the Navy, served in the Korean War, and circumnavigated the world in the destroyer on which he served. After mustering out, he started a business building custom cab-over RV¹s. Joyce says Dwight "was very good with his hands and could build anything." Dwight married and had a son, Cliff, who was 13 when his mother died of cancer. Five years later Dwight married a second time; this marriage lasted about seven years before ending in divorce. Dwight had his business in Long Beach building custom campers for many years. He liked to buy older camping trailers and refurbish them for resale. He also owned a trailer park in Pioche, Nevada with a partner.
By the 1980¹s Dwight was regularly going out on weekends exploring the desert. For some 20 years he rented a cabin at Indian Ranch in the Panamints, where he met "Panamint George" Hansen. Dwight became passionate about rock art during this time. Joyce Jauch met Dwight in 1990, and they took many desert trips together during which he pursued his interest in rock art photography. Joyce was with Dwight when he took most of his photos. The slide collection, she says, was Dwight¹s "pride and joy" which he only showed once or twice. Dwight was not one for standing up in front of folks.
Dan Messersmith says he knew Dwight during the years he lived in Kingman. The first MOE trip with Dwight he can document was June 20, 1997.
Charles and Mary Hughes met Dwight on one of Dan¹s desert trips. Dan says "I can¹t say I knew him Œwell¹ as he kept to himself a great deal. He was a bit shy and pretty quiet around camp but would speak up when the topic turned to Indians or rock art."
Mary remembers Dwight "as a kind, thoughtful man who loved and respected the Indian culture and sites." Both Dan and Joyce confirm that Dwight was quite knowledgeable about the Native American cultures of the Southwest.
Many recall that Dwight¹s interest in rock art included deciphering its meaning. As Dan remembers it, Dwight "believed he could read most if not all rock art. Numerous times on trips when we found pictographs or petroglyphs, he would tell us what they meant, at least according to him." Joyce says that Dwight "had an incredible eye for finding and seeing the images" and Charles adds that "if you were looking for a site Dwight would know where to look."
Dwight¹s activities in the desert went beyond hunting for rock art; he was an avid collector of artifacts as well as images. He was also a member of the Friends of the Mojave Road, Dan¹s MOE group, and worked with Bob Martin tracing the Hardy Road in Mohave County, AZ. Dwight¹s job for Bob Martin was finding and walking potential trails for the group to check out.
"He did a lion¹s share of that pre-work prior to the work parties coming through to prove out the trail with maps and GPS surveys," says Dan.
Dan Messersmith recalls that Dwight was a great 4x4 enthusiast and was very good with field repairs on his vehicle. He and Charles both remember that Dwight¹s trademark was a black SUV. Dan says he preferred Chevy Blazers and that although his last 4x4 was a white Jeep Cherokee he never liked it as well as the Blazers.
Unfortunately, Dwight was plagued by ill health for the last four years of his life. He had heart bypass surgery which sapped his strength, plus arthritis which kept him down. He died on January 19, 2007 in Kingman, Arizona. Joyce says he was an exceptional person, and we wish we had known him better. The DE appreciates his generosity in leaving us his slide collection